For this creativity break, take a picture of a window that you like visually or that intrigues you in some way. Maybe it’s a window you pass daily, or one that stands out in an unfamiliar area.

Write a short character sketch about who you think lives inside, what they do, or what goes on behind the window. It can be a more formalized short story, or simply a free form writing exercise in imagination.

bonus: send us your photo and text and we’ll publish a collection of window sketches from around the world! 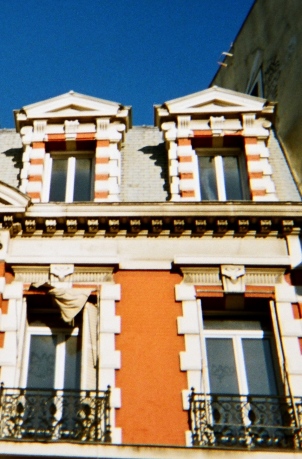 Behind the orange and white striped windows lived Cornelius. He spent his days selling popcorn at a movie theater, and at night he chain smoked, wrote bad poems, and sometimes tried to paint in search of the romanticized “starving artist in paris” life he had read about so many times. He’d been squatting in this abandoned building for 3 weeks, eating tuna out of a can, and trying not to start a fire with the candles scattered all over the room–so far doing a pretty good job living the cliché. 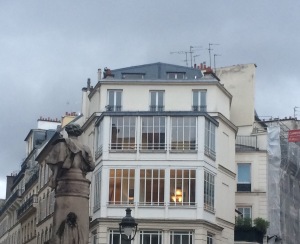 The woman who lives in this apartment is named Larissa. She moved to Paris 20 years ago (when she was 25) after meeting Luc, who was working as a junior banker at Barclay’s at the time and now is a senior banker at BNP. They have two children, Olivier and Christophe, 12 and 15, respectively.

Luc chose the boys’ names. Larissa chose the apartment. Inside, she has tried to modernize it, they have a stainless steel oven and refrigerator. But Luc’s mother insisted they take her furniture from the country house as a wedding present and it still smells rustic, out of use, though they have been using it for the past 18 years.

Larissa studied classics at the University of Edinburgh. She thought she would become an academic. She thought she would go back to school after she had the boys. Her French is still broken after 20 years of living here. The boulanger at the corner still teases her about how she pronounces “croissant.” Luc speaks to her in French. She replies in English.

On a typical day, she shops at the market, cleans, studies her wrinkles in the mirror (there is a new one at the corner of her right eye), applies the French creams that her fellow Anglophone expat friends swear by. She stares out the window on to Place de Saint Georges and watches the cars circling the statue. She wonders who is going to the theater tonight, she hasn’t even bothered to look what’s showing. She cooks cassoulet for her family and lights candles, turns off the overhead lights. She waits for the boys to come home.