Inspired by one of our favorite books about Paris, we decided to spend an afternoon in the Montparnasse neighborhood, formerly a happening bohemian scene in the 1920s and then again in the late 1950s. Now less of a nightlife destination, we were curious to see what the area still has to offer and also to check out the hotspots of Sally-Jay Gorce, the book’s young American protagonist. Although The Dud Avocado is a work of fiction, it’s based on the reality of this once booming left bank neighborhood and the lives of the creative, free spirits who spent time there.

Settling in with tea at her go-to bar, Le Select, we tried to imagine the environment as it was 60 years ago– filled with intriguing artists, French regulars sweating out their drinks, and East Coast crossovers. 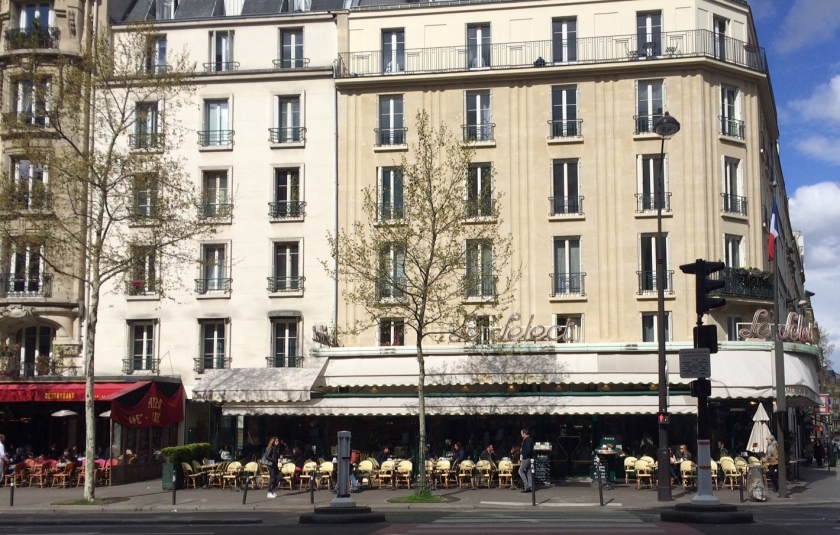 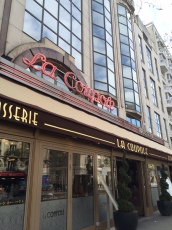 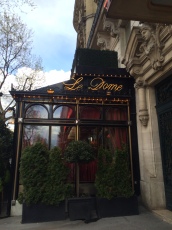 “The waiters at the Select comported themselves with that slightly theatrical mixture of charm, complicity and contempt that one would expect from servants in Hell.” pg. 93 The Dud Avocado

Cafe-goers and waiters inside Le Select 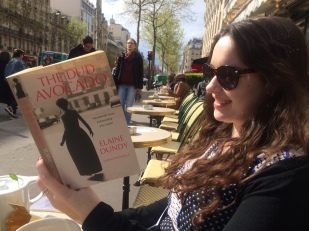 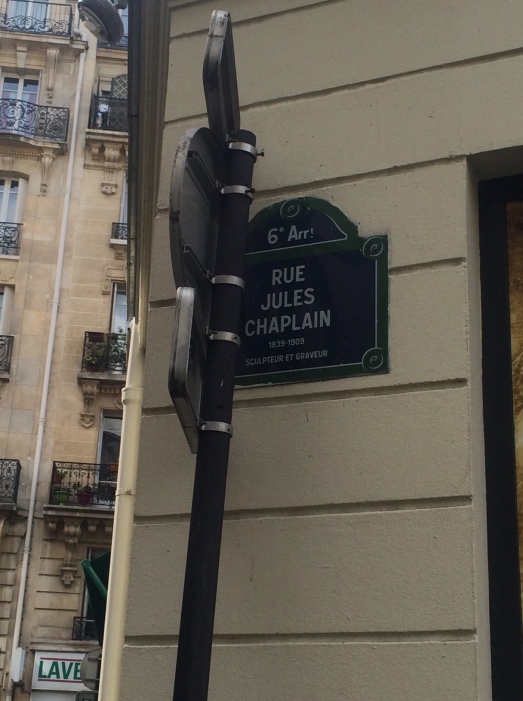 – Pay a pilgrimage to Simone de Beauvoir and Jean-Paul Sartre at Cimetière de Montparnasse (refer to the maps at each entrance for guidance).

– End your adventure at the very affordable, delicious crêpe stand at 9 Rue du Départ across from the Tour (the one with the black and gold sign). Pro tip: Their compôte de pommes and cinnamon sugar crêpes are the ultimate comfort food.

“Frequently, walking down the streets in Paris alone, I’ve suddenly come upon myself in a store window grinning foolishly away at the thought that no one in the world knew where I was at just that moment.”

This quote from The Dud Avocado, along with an image of a young woman walking down Boulevard Saint-Michel in a ball gown during the day, have stayed with me long after putting down this book. I was hesitant to pick it up at first, weary of the “privileged girl goes off to Paris to live out her French men and food fantasy” sub-genre of travel writing.

But I was surprised by the unpretentious and pink-haired protagonist, Sally-Jay Gorce, at once clueless and naive, but also spontaneous, sympathetic and oddly inspiring.

Sometimes when I am feeling stifled by my routine or when I feel like I am forgetting to appreciate the city, I like to think of Sally Jay’s thought that no one in the world knew what she was doing right at a certain moment. How that simple realization of self-dependence can be the most liberating part of being here at all.

I’m fascinated by the contrast between Sally-Jay Gorce’s Montparnasse and the one I know today. How neighborhoods change and what draws people to them. One of the best parts of exploring a city can be diving into its past.

After spending some time at one of this fictional character’s favorite non-fictional institutions (Le Select), I felt traces of the energy leftover from when it was at the center of Parisian social life.

This story of a free spirited, impulsive young American girl rooted in a very specific Parisian sub-culture inspires me to embrace the city around me and be present in each moment. As someone who loves to plan and know what to expect from situations, I needed her to remind me that sometimes the best things happen when you have no plan at all.

“I drifted into the street lit with love and began turning imaginary handsprings. I hadn’t the faintest idea where I was going.” pg 24 The Dud Avocado